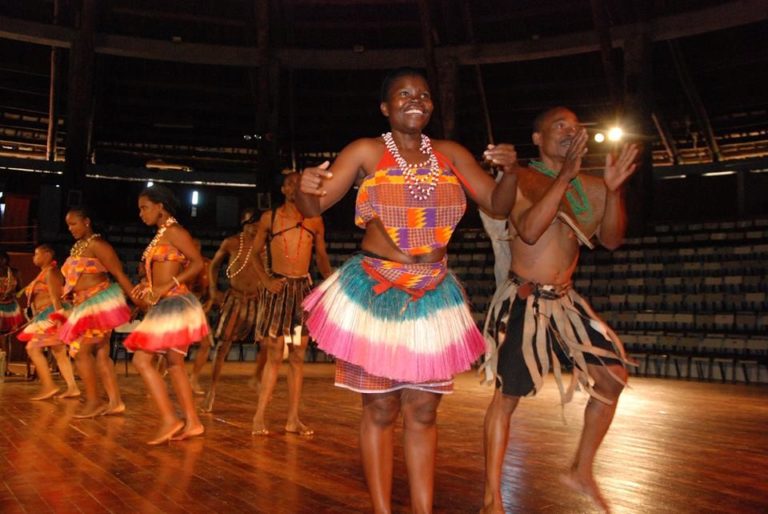 The word Bomas is derived from a Swahili word “boma” meaning a homestead hence the word bomas in plural.

As the foremost institution in cultural resource management and preservation, Bomas of Kenya plays a fundamental role in sustainability, development, and promotion of cultural tourism in Kenya. That is, it puts on a series of cultural shows which aims at promoting Kenya’s rich cultural diversity.

Action attractions at the Bomas of Kenya

The replicas of Kenyan homesteads; these are the round-shaped huts from twenty-three of the country’s ethnic groups that form part of the stunning attractions at the cultural and heritage site. To a casual onlooker, the rounded huts may look alike, but to a keen observer, the organization of the homestead will appear unique. It is because they are from distinct communities and built based on the social structures of diverse ethnic groups and relationships.

For example, a hierarchy can be observed in the homestead plan of a family that practiced polygamy. The size and distribution of granaries by members of the family show the economic well-being and responsibility of each family member. The differences in the building and construction materials give one a clue on the living conditions, environment, and lifestyles of the different Kenyan communities. This is also inclusive of the challenges their dwellings were designed to address.

Another essential aspect that won’t go unnoticed at the Bomas of Kenya is an Auditorium that is built in the shape of a traditional African hut. This is where dancing troupes from the 42 ethnic communities showcase the country’s cultural diversity through distinct arts like songs and traditional dances. In fact, this is the main reason why people always want to set foot at the cultural and heritage site. It has a simple exterior and an interior that is fitted with a state of the art sound system, spectacular stage lighting. An amphitheater seating arrangement that accomodates two thousand five hundred for a full stage is also available, and multiple large display screens mounted high up the walls.

Not forgetting the Utamaduni restaurant of Bomas of Kenya where mouth-watering traditional cuisines and delicacies from all over the country are found. Most dishes offered here represent Kenya’s current meal choices, and they contain an authentic taste of Kenya’s culture, both from the past and present. The meals are at pocket-friendly prices and they could be ugali, nyama choma, mukimo among others,

Bomas of Kenya is a must-visit for anyone wishing to experience the African culture in its unique and natural form via music, dances, and the African delicacies like Ugali. Entertainment is at its peak at the cultural and heritage site while you learn more about the African culture, which is fascinating in many different ways.