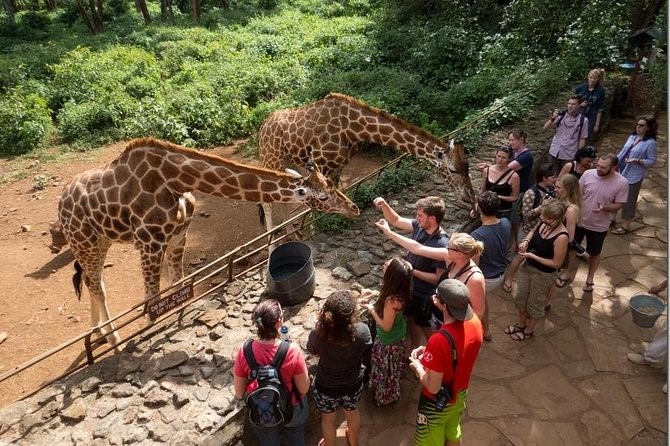 The Giraffe center is an excellent place to visit. It gives you the chance to get up close with these tallest species on Earth. It was initiated as a rescue and rehabilitation project for the Rothschild Giraffe.

At the time the Center was founded, there were only 120 of them left at a ranch located in Western Kenya. Giraffe center is also referred to as African Fund for Endangered Wildlife Kenya. It was started as a non-profit organization as it was only for conservation purposes. The original building has been refurbished and converted to a majestic boutique hotel known as Giraffe Manor.

There are many enjoyable and fun activities in Nairobi you can undertake at the giraffe center. You may choose to hand-feed the graceful creatures, just observe them or even kiss them from a raised ground, which appears to be a fantastic experience. The rangers at the Center will provide you with special pellets that you should feed the giraffe. You may also see warthogs around just snuffling in the mud.

You can decide to take a forest walk that is self-guided in the nearby Gogo River Bird Sanctuary. What you should be aware of is that the Center was also created to provide conservation education to the youth of Kenya and school children.

Giraffe center gets 90 percent of its funding from sales made at the gift shop and teahouse. The entrance fee also contributes to this sum of money for the conservancy. This means if you visit the giraffe center, you are directly adding value to conservation education. Lots of fun activities in Nairobi that you can take part in at this conservancy.

History of the Giraffe Center

The Center was founded in 1979 to breed and make sure the Rothschild Giraffe does not become extinct. At the time they were remaining only 120 of them in the country. Conservation efforts escalated in 1983 when an environmental education center was opened for the youth.

Backdating to the early 70s, Jock and his wife Betty Leslie-Melville discovered that the Rothschild Giraffes were decreasing in number on Soy Ranch. The ranch was then to be subdivided in a bid to resettle landless people. This would categorically mean a tragic end to the existence of the Rothschild Giraffe.

Luckily the land was first to be used as a military base, and this gave the couple a window to relocate breeding herds to four national parks in the country. Jock and his wife also brought with them two young giraffes back to Nairobi in a suburb they were living. It was to create awareness on the conservation of giraffes.

More giraffes were brought into their “little conservancy” when they were filming a book they wrote about a giraffe. This means that there were a lot of giraffes at their homes, and this gave them the idea of creating a sanctuary for giraffes that will also offer education to Kenyan children.

So they raised funds and came up with the center which has been purchasing more and more land to increase its size and accommodate more activities. The center has been thriving so far because they have even been relocating some Rothschild giraffes to other sanctuaries and national parks such as Soy ranch and Ruma Game Reserve.